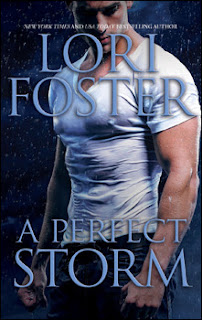 A Perfect Storm (Men Who Walk the Edge of Honor #4) by Lori Foster
Synopsis (Goodreads):


He never saw her coming...

Spencer Lark already knows too many secrets about Arizona Storm, including the nightmare she survived and her resulting trust issues. But in order to expose a smuggling ring—and continue avenging his own tragic past—the bounty hunter reluctantly agrees to make Arizona a decoy. Yet nothing has equipped him for her hypnotic blend of fragility and bravery, or for the protective instincts she stirs in him.

Arizona wants to reclaim her life, which means acting as bait to lure the enemy into a trap. Sure it's dangerous, especially with a partner as distractingly appealing as Spencer. But as their plan—and their chemistry—shifts into high gear, Arizona may discover there's an even greater risk in surrendering her heart to a hero...

My Thoughts: Holy smokes. This cover. THIS COVER. Wow. You had me at your delectable abs and manly pecs, Spencer Lark. And the wet t-shirt? Divine. The awesome thing here, though, is that there's more to this book than just a hunky cover. It's true! There's danger and excitement and a tipsy young woman who likes to fight and some hot, hot sexin'.

For the record, I haven't read any previous books in this series. YET. I picked this one up on a whim (yes, for the cover) and I dove in before I managed to get the rest of them. That said, I didn't have a problem coming into the series on book 4 and I picked up enough about the previous heroes (the heroes had a bigger part than the heroines, although we did get to meet them all) to want to read their stories now. Sexy Alpha males who know how to treat their ladies right are a particular weakness of mine.

I must say that I really liked Arizona's emotional journey. Her past has damaged her. Her sexual encounters up to this point have been violent and against her will. She knows she has problems -- more than just issues with intimacy, really. She deals with them by facing them head-on. It's not always pretty and she has a big problem with looking weak in front of others, but she jumps in with both feet and forces herself to handle it. She trusts Spencer enough to know that he won't hurt her and she blossoms under his care.

Spencer. Oh, Spencer. He has the sexy working for him. He's trying to be all noble and help Arizona heal from her issues. It doesn't quite work out like he planned, though. For the most part because Arizona might be slightly battered but she's not broken. She knows this. She just has to convince him (and the other men on the team) that she's willing and able to help them just the way she is. She knows what she wants and she goes after it with determination. Lots of determination. I liked it.

Fun and sexy enough that I'm going to backtrack and read the previous books (which also have hot covers, in case you were wondering) so I can see how it all plays out.

Books in this series
1.When You Dare
2. Trace of Fever
3. Savor the Danger
4. A Perfect Storm - Paperback | Kindle