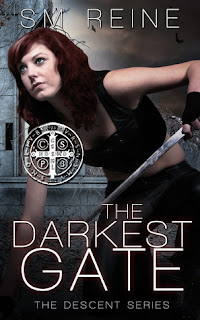 
When Elise Kavanagh retired from demon hunting, she swore it would be permanent. But an attack from a powerful necromancer forced her back into the business, and now she's trying to balance her normal boyfriend and normal job with everything supernatural.

Mr. Black is a demon hunter gone rogue. He's enslaving angels and stealing ethereal artifacts in pursuit of forbidden immortality. An old grudge drives him to make his final stand in Elise's territory. Destroying her life and killing her friends isn't the goal, but it's a definite perk.

A demonic overlord offers to join against Mr. Black and protect Elise's loved ones. All she needs to do is ally with the demons she's sworn to kill, at the cost of her morals--and maybe her immortal soul. But once she crosses that line, there's no turning back.

Nothing is sacred when Heaven and Hell collide on Earth...

My Thoughts: It had been a while since I read book 1 in this series and, holy smokes, I had forgotten so much of the crazy that Elise and James got into in that one. Death, zombies, more death... which is pretty much what they deal with in this book if you swap out zombies and insert "giant demonic spiders". Huh. No, there's even more crazy in this one, I think. Highly suspicious covenants with powerful and deadly creatures, enslaved angels, one nasty bad guy trying to raise an even nastier bad guy, cage fights, and interdimensional trans-location. You  know, the basics.

One thing I think I need to talk about is Elise's relationships. I can't really see anything happening long term with Anthony. Besides the fact that Elise is emotionally closed off (with good reason) and has some serious communication issues, Anthony is only human. Best case scenario, he'll die quickly one of the times they tangle with something otherwordly. Worst case? He'll die slow. He's a good guy, don't get me wrong, but he's not really equipped to handle Elise's world. I also don't think he really understands her. Which isn't his fault because Elise is not one to share her inner feelings. Or show any outer ones.

James, on the other hand, knows that she's a messed up, emotionally stunted woman. That they've grown apart recently was one of those things that stung a little. Their bond goes deeper than most people can imagine and it grows exponentially in this book. One thing I'm not a huge fan of is the way that both Anthony and Stephanie (James' lady friend) keep pulling at the relationship that James and Elise have. While I love the tension (and the fact that part of Elise couldn't give two shits about how Stephanie feels about her) this brings, I *want* James and Elise to find a happy balance. Right now, they're pulled in too many directions and it's hurting them.

This was an action packed ride from beginning to end. Elise is a lethal mess trying to masquerade as a normal girl. The harder she tries to pull away, the more she gets pulled into the chaos around her. I'm intensely curious to see where things go from here and I absolutely expect that it will be properly bloody and pull of the type of whacky shenanigans only Elise and James can extract themselves from.

Reading challenges: Ebook Challenge, Why Buy the Cow? Challenge
The Darkest Gate was a free Kindle download I picked up on 09/27/12.