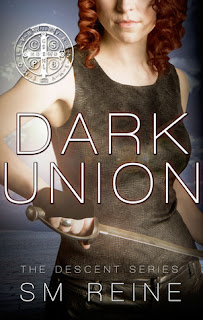 
Every fifty years, the most powerful ethereal and infernal beings convene on Earth to resolve conflicts with mediation by kopides--humans born to police relations between Heaven and Hell. They're meeting in Elise Kavanagh's territory this year, and she used to be the greatest kopis in the world. But she's not invited.

An old friend, Lucas McIntyre, asks her to attend the summit in his place. But when she arrives, she discovers that a human faction called The Union has taken charge of the summit, and they're not playing nice. Worse yet, someone has killed a prominent Union member, and now they're demanding blood.

My Thoughts: Good gravy! When S.M. Reine decides to stir up the pot, she does it in a BIG way! As bad as the otherworldly bad guys are, I find The Union to be utterly terrifying in a creeping, insidious sort of way. They're masquerading as the good guys, but they have their own agenda that threatens Elise and all the others like her. That gives me the willies in a way that no giant spider demon can.

I *really* like the direction the overall arc is taking. It's so dark that I can't see a way out of it for our heroes. Speaking of which, having Elise and James in two different cities was hard. The bond between them feels strained and unless they start talking to one another, I don't think that's going to change any time in the near future.

As stoic and unaffected as Elise normally is, I'm incredibly glad that something finally prodded her into stepping up to the plate and taking charge. Sure, it takes a coming together of the ethereal and the infernal, but she's finally letting herself take on the responsibilities that she's been running from. Big things are coming and Elise is going to need all the allies she can get her hands on.

Reading challenges: Ebook Challenge, Why Buy the Cow? Challenge
Dark Union was a free Kindle download I picked up on 09/27/12.