No Limit by Susan Hayes [Review] 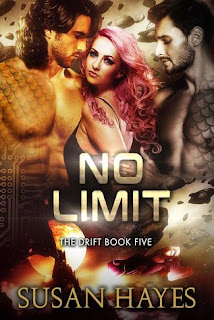 Tyran Varosa and Braxon Torr are scouting for planets to colonize and new allies to trade with. The last thing they expect is to find a potential mate along the way. Especially not a diminutive female with pink hair and a warrior’s spirit.

Phaedra Kari has been called a lot of things in her life: trouble, cyber-jockey, lunatic, hacker, but never someone’s mate. Not until Tyros and Ket arrived at the Drift.

A chance for a new life is within their grasp, but to seize it they will have to find a way to escape their past, defy the rules, and claim the future for themselves.

Thoughts on No Limit: I'm not ashamed to admit I have THE BIGGEST soft spot for strong, honorable aliens who find their special someone and have to work around the customs and quirks between their two cultures. I just...love it. I love the weird misunderstandings and that moment when everything clicks.

As you can probably guess, Tyran, Braxon, and Phaedra worked for me. She's a little headstrong and is determined to make her mark by helping those who need it most. They're looking for a planet to spread their wings *snerk* and build something new for their people.

Of course, things don't go as smoothly as one might hope. You know, what with the corporations vying for a piece of the alien pie and people dropping like flies unexpectedly.

Betrayal, heartache, love, and sexy times. The Drift is FUN.