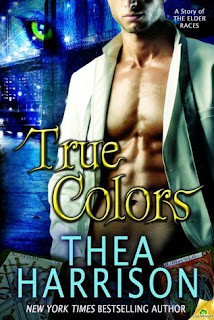 
Meeting your soulmate? Great. Preventing your possible murder? Even better.

Alice Clark, a Wyr and schoolteacher, has had two friends murdered in as many days, and she's just found the body of a third. She arrives at the scene only minutes before Gideon Riehl, a wolf Wyr and current detective in the Wyr Division of Violent Crime—and, as Alice oh-so-inconveniently recognizes at first sight, her mate.

But the sudden connection Riehl and Alice feel is complicated when the murders are linked to a serial killer who last struck seven years ago, killing seven people in seven days. They have just one night before the killer strikes again. And every sign points to Alice as the next victim.

Product Warnings
This book contains a hot police detective, a violent murderer on the hunt, and a heroine that can blend in anywhere...

My Thoughts: Can Thea Harrison write smokin' hot men or what? I mean, wow. Just... wow. I love the insta-mate attraction that both parties feel and I love how Riehl is driven to comfort Alice when she's so obviously distressed and heartbroken by the things that she's seen. What can I say, folks? Strong men brought to their knees by their ladies are my fiction kryptonite. Yes, I get all swoony and puddly whenever I read them.

Although short, Thea Harrison has given us a look at another aspect of the Wyr that I found fascinating. Unlike Dragos and the Wyr in the other books, Riehl is not one of the immortals. He has a longer than average lifespan but he isn't as long-lived as Dragos and his ilk. This is one of those things that I hadn't thought about in detail (other than... Oh, immortal mythical, shapeshifting dudes! AWESOME!) and the idea that some of the species aren't immortal was shocking and intriguing. There are so damn many layers to this world that I feel like I'm never going to get tired of it. EVER.

I loved the dynamic between Riehl and Alice. I loved how he treated her. I loved that he understood her on an instinctive level. Yes, I did figure out who the killer was fairly early, but that's only because I'm allowed to guess the murderer correctly approximately 3 times a year. I chose to use one of those 3 times on this book.

Overall this was a fun and steamy addition to the series as a whole and it was nice to step back into the Wyr world and spend time with Thea's sexy Alpha men.