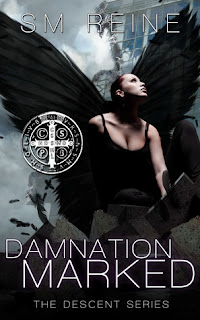 
There's something in the earth deep below Elise Kavanagh's territory. A shadow is falling upon local demons to devour their flesh and harvest their souls. And it's coming for Elise next.

The Union has an easy way out. They want to send Elise into hiding again with her former partner, James Faulkner. All she has to do is surrender the territory and trust that they can protect the ethereal ruins, the dark gate, and the city she's come to know as home.

Greater powers have other plans for Elise and her fabled power as Godslayer--plans that mean surrendering her life and blood to the most powerful demon alive. But if she descends, there's no turning back. Once she gazes into the abyss, it will gaze back into her... and Elise will be damned forever.

My Thoughts on Damnation Marked: O.O Elise doesn't know how to take the easy way out of anything, does she? She's a fighter. Even when the odds are stacked against her and her man-witch and she aren't on the best of terms, she barrels in head first and tries to do the right thing.

She's so tortured by all the ones she hasn't managed to save, too. Her exhaustion at life and at battling against the things that go bump in the night is tangible. Yet, when the chips are down, she's not ready to roll over and die. She wants to live. She wants things to be better. Whether that means teaming up with the demons who aren't there to hurt and harm or going toe to toe with the baddest demon on the block, she tries.

And, OMG!, her relationship with James absolutely kills me. She's rough around the edges, sure, but she loves him and seeing him with someone else is something that she can't handle. As hard as she is and as much as she doesn't show much emotion, I felt for her.

The Union is a little too... gung ho for my taste. I don't know how I feel about Anthony because I ultimately want to see the relationship with James reach its logical (to me) conclusion.  Meanwhile, James has secrets AND he has secrets that have been kept from him.

IT'S VERY TANGLED. And that's part of the charm of this series. I don't know if I'll survive the next three books.