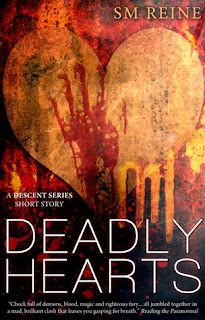 This is a short story about the length of two chapters in my other books (9000 words), which takes place before the events of Death's Hand. It's a gift to my existing readers, who believe deep in their hearts that James's butt needs to be slapped once in a while. I agree completely, readers. Trust me.

My Thoughts on Deadly Hearts: I think the funniest thing IN THE WORLD is Elise trying to pull off the housewife thing. She is seriously not cut out for baking and playing nice. Which works well when she's kicking demon ass but is unnerving when she's attempting to go undercover as James's wife.

As short as it is, this story packs a lot of wallop. Besides the whole housewife Elise thing, we get a hint at the sad, powerful love that Elise holds for James and how it affects her when her barriers are down. Her ability to compartmentalize her feelings and do what she needs to do to keep the world safe is astounding. And a little frightening.

Fans of the series won't want to miss this short story. It's bloody, dark, and a little sad. And James gets his ass slapped. Which is HILARIOUS when it's Elise doing the slapping.

Posted by Kelly Rubidoux at 9:00 AM