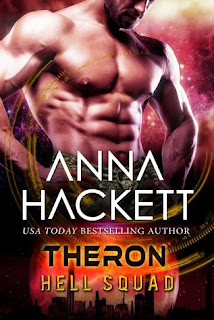 
Squad mates, best friends, and fighting to survive in the middle of an alien invasion. Can she make one stubborn alpha male soldier see her as something else?

Sienna Rossi has always been a mix of contradictions. She loves ice cream, likes cooking, and is skilled at taking down aliens with her squad. Sweet and tough, soldier and woman, most people can't seem to make sense of her...even the loving family she lost in the invasion and especially men. One man accepts her as she is, her best friend Theron. But the big, silent, muscled soldier has her firmly in the 'friends' zone...except that Sienna knows he wants her, and she's determined to claim the stubborn man as hers.

Theron Wade lives to fight aliens. They killed his parents, his foster siblings, and his fellow Rangers. Now he has a new team--the tough, mostly-female Squad Nine. But one certain female haunts his dreams and stars in his darkest fantasies. Sienna is his sunshine in the darkness. He wants to her to be happy...and he knows that would never be with a man like him. A man with darker, rougher tastes that would shock her.

As Squad Nine works to track and destroy a dangerous alien device, best friends collide. Theron introduces Sienna to a world of rough, edgy passion that she craves. But as a mission goes off track, the two of them will risk everything for love, for their lives, and to save the world.

Note to readers: This sci fi romance contains a lot of action (think climbing shattered skyscrapers and daring rescue missions), tough warriors (the kickass ladies of Squad Nine and the badasses of Hell Squad) and a steamy romance (lots of edgy sexy times between a quiet, stubborn soldier and his tenacious best friend). So if you like it fast, and gritty, and sexy, this is for you!

Thoughts on Theron: I kinda feel like I say this every book in this series, but it's so true I can't stop myself. THINGS ARE HAPPENING. THINGS! The survivors are learning more about the vague Gizzida plot they uncovered in previous books and THINGS LOOK BAD.

Not terrible, mind you, because the Squads don't let things like world-ending alien plans keep them down for long. But they still look bad.

Anywho. This book isn't all about the alien baddies and their plan for the total annihilation of the human race. Nope. There's also some gritty romance brewing between big, silent Theron and perky Sienna. He thinks she deserves better than him, she's determined to show him that he's PERFECT for her even if she has to smack him over the head with a lead pipe in the library. (Just kidding about that part. There were neither libraries nor lead pipes. Well, unless you count the one Theron's carrying around in his pants. HA! Sorry. I make myself laugh sometimes.)

All lead pipe jokes aside, those two were sweet together. Theron might have a few knee-jerk caveman tendencies, but Sienna's not afraid to point out those moments when they come. And she's more than capable of holding her own against him.

I've enjoyed all the books in this series, but I have to admit I've been mighty entertained by the Berserkers (EEE!!!!) and their rough and tumble ways. I can't wait to see the chaotic mayhem that comes from them falling for their special someone. I'm ready and willing. Let's do this!