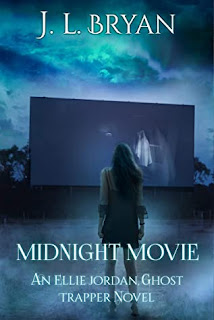 
Long ago, dreams glowed on the screen under the night sky at the old drive-in theater. Once an attraction drawing families and teenagers from miles around, the theater has sat dark and silent for years, its former bright, carnival-like atmosphere a distant memory.

A young family brings the forgotten theater to life with a new, modern vision for its future, but strange troubles plague them. Something from the past haunts the theater and won't leave them, or their occasional customers, alone. The family is living in the old theater manager's apartment located inside the drive-in's screen tower, so they enjoy no peace even when they go home after work late at night.

With disturbing supernatural activity threatening their small business and their family, they turn to paranormal investigator Ellie Jordan for help—but the mythic world of the movies has its own dark magic, and Ellie may not be prepared to face what awaits her when the sun goes down, the lights go out, and the show begins.

Thoughts on Midnight Movie: Ellie and her crew (by which I mean Stacey, because Stacey is the crew!) are heading to the drive-in and...well, it was fun to see Ellie getting to take it a little easier for this adventure. Which isn't to say I don't enjoy her usual cases, but I liked seeing her get to relax a bit this time. Doing research in her pajamas sounds like a fantastic way to spend time.
To be fair, however, this case wasn't a cakewalk or anything. It just happened to be closer to home than most of their others. Ellie and Stacey still had to do the late night guard duty to watch for out-of-the-ordinary things. They still had to work their way through the cast of suspects to narrow down who (or what!) was haunting the place. They just got to spend their downtime in their own beds.
Speaking of the cast of ghostly suspects...there was a lot going on here. Starlets cut down in their prime, creepy old women, movie stars, and murderers. Sprinkle in a little obsession and a need for vengeance and you end up with a simmering cauldron for ghostly goings-on.
Drive-ins, man. They're a decaying relic of another age and BOY did I like watching this haunting unfold. Ellie and crew dove in and they ended up with a few life-threatening encounters to show for it. Also, they got to watch a whole bunch of movies. For research. Excellent!