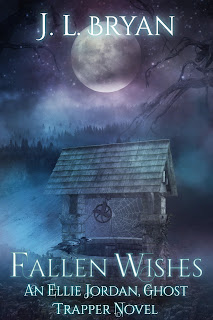 Over generations of neglect, the winding paths of the gardens have become overgrown, its marble statues and columned buildings abandoned to the wild.

Now a family recovering from tragedy have devoted themselves to restoring the estate, but the ghosts of the past remain strong. Shadowy figures walk the labyrinth of overgrown gardens. A strange wishing well steeped in local legend attracts trespassers who climb walls and gates in their eagerness to throw in a coin and make a wish.

Paranormal investigator Ellie Jordan travels there to study and confront the dark entities who stalk the house and grounds by night, terrifying the family who now live there. The secret history of the plantation proves as shadowy and labyrinthine as its maze of gardens. Enchanting on the surface, Canterbury Gardens was founded on the darkest of wishes, and every wish that comes true has its price.

Thoughts on Fallen Wishes: Ellie and her adventures are always so much fun to fall into. I mean, the lady not only gets to explore old houses and creepy ruin-esque buildings, she also gets to put the pieces of very old puzzles together as she works on figuring out what's going on. That appeals to me. I know Stacey grumbles about the research, but I think it's neat how the two of them piece together clues to unravel old mysteries.

But enough about the research side of things. Let's talk about the actual case. This time around, Ellie and Stacey are investigating an old plantation that houses massive gardens that are more creepy than whimsical. A whole lot of seemingly not-interconnected ghostly activity, a wishing well that is almost more creepy than the garden surrounding it, statues, old bits of stories and rumors, and a family trying to move forward after a tragic loss rounds out what they're dealing with.

(As an aside, as creepy as these particular pleasure gardens were, the idea is weirdly compelling. It's like a small scale version of an amusement park with slightly off-kilter statues and terrifying stories instead of rides. I dig it.)

A lot of research, a little minor theft (which is remedied later on, for the record), some dangerous ghosts, and Ellie and Stacey doing what they do best. *thumbs up*

Posted by Kelly Rubidoux at 5:00 AM