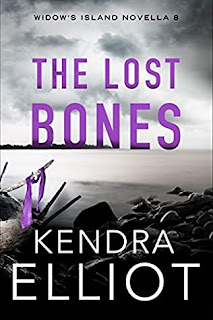 
When former FBI agent Cate Wilde moves back to Widow’s Island, she envisions a simpler life than the one she had in law enforcement. But Cate’s past has a habit of catching up with her. When she receives a mysterious package containing a child’s mandible, she finds herself thrust back into action.

The mandible leads Cate to an unsolved case she worked seven years ago—the kidnapping of a three-year-old girl. At the time, Cate suspected the girl was kidnapped by her overprotective father. But after they both vanished, the case went cold.

At the urging of the girl’s mother, Cate dives back into the case and learns her prime suspect may still be a threat. Armed with new clues and a fresh perspective, Cate must confront the possibility that the kidnapper is poised to strike again. But can she save his new child from the same fate before it’s too late?

Thoughts on The Lost Bones: It's Cate's turn to dive into a case. An old one, as it turns out. One that's stuck with Cate in the years since it happened. So even though she's left the FBI, she steps in to help in any way she can when the child's mandible ends up in her possession.
This might be a cold case (which is rough no matter how you look at it since nobody really has any closure from those in any way, shape, or form), but Cate has Henry and the rest of the islanders at her back and a dogged desire to find answers. A lucky break or two, a little detective work, and Cate being in the right place at the right time puts them on the path to where the killer might be hiding out.
I must say, while island life agrees with Cate, she's also in her element putting pieces together and tracking down clues. *thumbs up*