Spellcasting with a Chance of Spirits by Mandy M. Roth [Review] 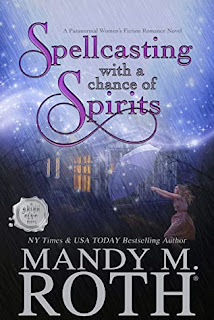 
I can see and hear the dead. I can also talk to animals. As a natural-born witch and medium, I can do a lot of odd things. In most people's eyes, that makes me a loon. I like to think of it as being unique and eccentric. Plus, now that destiny has brought me back to the town I was born in, I'm not all that different from the supernatural residents of Grimm Cove.

When I find myself being hunted by a dark entity, I turn to the only person who can really help. Too bad he dislikes people in general, would rather keep to himself, and is positive my elevator doesn't stop all floors. And he's not a fan of squirrels which does put a kink in things considering my familiar is one.

Thoughts on Spellcasting with a Chance of Spirits: I'm a little torn on this series as a whole. I felt like the first book was solid in terms of plotting and characterizations. The second felt a little light, but I went with it because I like werewolves. I like werewolves A LOT. This one, though...this one felt like plot and character were even lighter than book 2, but the banter was ratcheted up to eleven. Like, there was A LOT of quirky back and forths between our main characters and various secondary characters. A LOT. To the point it took away from what was happening and diluted the characters even more.
Then there was Marcy and Bram. I honestly don't know if I liked the two mains. Marcy was...I don't know. I felt like she was made the butt of a lot of jokes because of her free-spirit and it didn't sit well with me. Bram was borderline stalkerish (and I think I'm being generous in saying "borderline" and TRUST ME I get that fated mates just KNOW even when they don't know, BUT STILL) and everyone was okay with it? Even when Marcy found out he'd been taking pictures of her for years (O.o), EVERYONE WAS COOL WITH LETTING HER MISCONCEPTION OF WHAT HE WAS DOING WITH THOSE PICTURES STAND.
There was something vaguely icky with seeing someone's trust being taken advantage of (repeatedly, as with Marcy and the dude she modeled for and Marcy and ...I don't know, pretty much everyone). On one hand, I get that these are lighthearted books and Marcy wasn't bothered by how people treated her, but it bothered me as a reader.
So I didn't love this one, but it looks like there are going to be a few more books in this series, so we'll see how things play out.