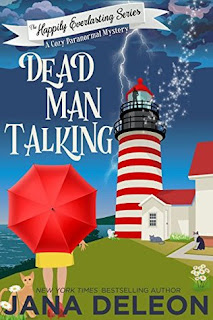 
Welcome to Everlasting, Maine, where there’s no such thing as normal.

Meteorologist Zoe Parker put Everlasting in her rearview mirror as soon as she had her college degree in hand. But when Sapphire, her eccentric great-aunt, takes a tumble down the stairs in her lighthouse home, Zoe returns to the tiny fishing hamlet to look after her. Zoe has barely crossed the county line when strange things start happening with the weather, and she discovers Sapphire’s fall was no accident. Someone is searching the lighthouse but Sapphire has no idea what they’re looking for. Determined to ensure her aunt’s ongoing safety, Zoe promises to expose the intruders, even though it means staying in Everlasting and confronting the past she thought she’d put behind her.

Dane Stanton never expected to see Zoe standing in the middle of her aunt’s living room, and was even more unprepared for the flood of emotion he experiences when coming face to face with his old flame. Zoe is just as independent and determined as he remembered, and Dane knows she won’t rest until Sapphire can return to the lighthouse in peace, so he offers to help her sort things out.

Armed with old legends, Sapphire’s ten cats, and a talking ghost, Zoe has to reconcile her feelings for Dane and embrace her destiny before it’s too late.

Thoughts on Dead Man Talking: Returning to one's hometown after an extended period away can be interesting. When the town in question is a hotbed of quirky and supernatural (something Zoe has a hard time believing in, btw), things get VERY interesting. Throw in your hunky ex, some suspected B&E, a handful of sexy deputies, a whole lot of cats, and a pants-less ghost and, well, let's just say Zoe has more than a few balls she's keeping in the air and interesting doesn't even start to describe what she's experiencing.
Yeah. So. Returning home. For Zoe, it's not under the best circumstances since her aunt is in the hospital and things only go downhill from there. She suspects Sapphire's fall wasn't accidental, a ghost is wandering the lighthouse, and the one guy she never forgot is doing renovations in the very place she's staying.
As for Dane, seeing Zoe again reminds him of everything they shared. It turns out he likes her just as much now as he did back then. Their biggest roadblock is her job back in L.A. Which...is sort of on the rocks, so there's that. Oh, and I guess there are the occasional break-ins of the lighthouse which puts Zoe in danger, too. Dane's not a big fan of Zoe being in danger.
Cats and ghosts and potential hidden treasure. All around, a fun read!