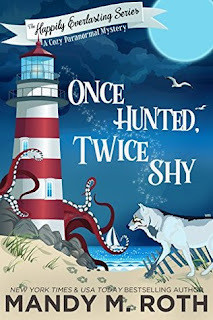 
Welcome to Everlasting, Maine, where there's no such thing as normal.

Wolf shifter Hugh Lupine simply wants to make it through the month and win the bet he has with his best friend. He’s not looking to date anyone, or to solve a murder, but when a breath taking beauty runs him over (literally) he’s left no choice but to take notice of the quirky, sassy newcomer. She’d be perfect if it wasn’t for the fact she’s the granddaughter of the local supernatural hunter. Even if he can set aside his feelings about her family, Penelope is his complete opposite in all ways.

Penelope Messing wanted to get away from the harsh reminder that her boyfriend of two years dumped her. Several pints of ice cream and one plane ticket to Maine later, she’s ready to forget her troubles. At least for a bit. When she arrives in the sleepy little fishing town of Everlasting, for a surprise visit with her grandfather, she soon learns that outrunning one problem can lead to a whole mess of others. She finds herself the prime suspect in a double homicide. She doesn’t even kill spiders, let alone people, but local law enforcement has their eyes on her.

The secrets of Everlasting come to light and Penelope has to not only accept that things that go bump in the night are real, but apparently, she’s destined for a man who sprouts fur and has a bizarre obsession with fish sticks. Can they clear Penelope’s name and set aside their differences to find true love?

Thoughts on Once Hunted, Twice Shy: A shifter and a hunter. Everlasting certainly has some interesting pairings, doesn't it? To be fair, Hugh and Penelope as a couple is probably one of the least odd things going on. Between the dead bodies, the suspicious townsfolk, an anti-cursing spell that has some pretty hilarious results, and something fishy happening on the water things are INTERESTING in town.
I'm just going to say Penelope learns some eye-opening lessons when she decides to drop in on my grandfather. She's heartsore from her recent breakup and she's definitely not looking for love. Yet, the (sometimes) foul-mouthed man she accidentally hits with her car somehow manages to steal her heart anyway. And he shows her a thing or two about what's going on around town.
On Hugh's end, getting hit by Penelope's car ends up being a blessing. He might not think so at first, but he ends up with a special someone out of it PLUS he gets to add a grumpy old hunter as his grandfather-in-law. Which amuses me. A lot.
A quirky town, a few dead bodies, hidden talents, tentacles, and a whole lot of oddball friends and family. I like spending time in Everlasting. It's fun.