Nancy and the Naga by Honey Phillips [Review] 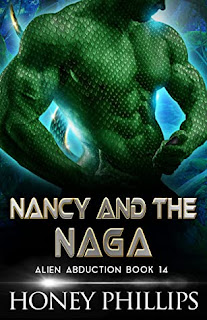 Alien Abduction
1. Anna and the Alien
2. Beth and the Barbarian
3. Cam and the Conqueror
4. Deb and the Demon
5. Ella and the Emperor
6. Faith and the Fighter
7. Greta and the Gargoyle
8. Hanna and the Hitman
9. Izzie and the Icebeast
10. Joan and the Juggernaut
11. Kate and the Kraken
12. Lily and the Lion
13. Mary and the Minotaur
14. Nancy and the Naga - Paperback | Kindle
15. Olivia and the Orc
16. Pandora and the Prisoner
17. Quinn and the Queller


Can an alien prince in exile protect an escaped slave who won’t surrender?

A year as a slave in an alien mine is enough to destroy any woman, but Nancy refuses to give up hope. When she sees a chance to escape, she takes it.

Her freedom is worth almost any price, but she didn’t anticipate how hard she would have to struggle to survive. When a strange new alien discovers her, she fears the worst. He’s part man, part snake, and all dangerous - but he makes her feel safe for the first time since she was taken.

Banished from his home planet, former prince Kaiyo has found a place for himself in the dangerous underworld of Kalima. For the right fee, he’ll solve any problem - quickly, efficiently, and with no questions asked. The only problems he can’t fix are his own.

When an uncharacteristically altruistic action leads to the discovery of a fierce, frightened woman, his long-forgotten instincts demand that he protect her - whether she wants him to or not. And the more time he spends with the tasty human, the more he realizes he never wants to let her go.

But Kaiyo’s past is about to catch up with him. He has no intention of releasing his claim on Nancy - but will she be able to handle all of his secrets? And will his people ever accept a human?

Thoughts on Nancy and the Naga: When we first met Kaiyo, he came across as a somewhat brutal, sly fixer. You know, the guy who quietly took care of bodies and cleaned up other undesirable problems for people who were happy not to ask too many questions. While he is most definitely that, he's also...well, he's pretty sweet to Nancy. As we find out, he's not just some random street thug, either.
After her initial wariness and against her better judgement, Nancy finds herself trusting Kaiyo. He alleviates her loneliness and keeps his word, which is HUGE for her. He also does everything he can to keep her safe. As you might guess, that's another point in his favor.
Things get a little dicey for our couple when Kaiyo gets called home. Court life has it's own set of pitfalls and Nancy doesn't quite trust the people close to Kaiyo to have his best interests at heart.
A battle of wills, kisses and other steamy things, a little case of betrayal, found family, and a human in danger. These aliens sure don't disappoint! *thumbs up*