Fire in His Kiss by Ruby Dixon [Review] 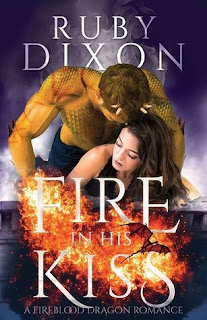 Fire in His Kiss (Fireblood Dragons #2) by Ruby Dixon
Format: ebook
Source: purchased
Disclaimer: As an Amazon Associate, I earn from qualifying purchases.
Date read: May 28, 2017


Bloodlust and insanity rule my existence. As a fierce drakoni warrior, this strange new world I find myself in eats at my mind until there is nothing left. There is no light or clarity...until she arrives. I save her life, plucking her from the sky.

From that point on, she is mine.

But the human I have chosen for my mate - Sasha - is fragile and wounded. She does not trust me and fears my presence. I will not give up, though. I will do anything to give her my fires and bond us both in body and spirit. How can I convince her that I want nothing more than her happiness if she will not let me touch her?

How does a dragon woo a human?

Thoughts on Fire in His Kiss: Oh, man. Dakh's a hot mess, isn't he? He's totally clueless when it comes to humans and the madness eating away at his mind has a good hold on him. When he snatched Sasha during the rescue, I wasn't sure how he was going to get an injured, wary woman to see him as more than one of the creatures who's been terrorizing her world.

But he does. Eventually. Honestly, the poor guy is so lost it takes him a while to catch on that human women aren't like drakoni women. Let's just say there's a pretty steep learning curve and leave it at that.

Given Sasha's past interactions with men, her learning curve is even steeper than most, I'd say. The woman is guarded.

Things we did find out: There's more to the dragons' stories than we've seen. Kael was able to piece together some of why the dragons were acting the way they were, but his memory is spotty. Dakh's is also a little holey, but when you start putting together all the little pieces Sasha and Claudia have gleaned, you get to see a bigger picture. And then there's an intentionally vague big thing that happened. We get some answers that pose more questions.

Bottom line - I'm always down for more crazy dragon goodness. Even when they're really lost and have no clue what's going on. Or maybe especially when they're like that.