Fire in His Veins by Ruby Dixon [Review] 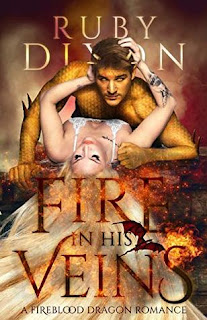 
I’ve wanted Andrea since the moment I saw her.

But she’s human. I’m drakoni. The only way I’ll stay sane and not lose myself to the madness that’s swept over my people is if I keep my mental walls strong. I have to give up everything that makes me a dragon. That means no telepathy, no fire breathing, and no battle form.

I certainly can’t take a mate. Andrea can’t be mine.

When her brother escapes the fort, though, she needs help tracking him down. That means I’ll be alone with her, breathing in her sweet scent, and it may be too much for my control.

What happens if I give in to my dragon? Will I take her as my mate…or tear her throat out?

Thoughts on Fire in His Veins: Liam, man. The poor guy's in a rough place. Not that all the drakoni aren't in a rough place what with their rampaging case of the crazies and all, but Liam's cut himself off from his drakoni side and he's living a half-life as a human and I FELT for him.

Plus, there's the whole fear he has (rightly so) that if he goes dragon he might end up hurting (or killing) Andrea and what's a drakoni without a mate to anchor him? Pretty darn screwed if they're on earth.

So Liam's in a tough situation. The cold shoulder Andrea's sending in his direction doesn't help, either. She's determined not to become what she was before and ends up hurting Liam when she goes out of her way to ignore him. Actually, Andrea's actions are a little more complicated than that for the big guy. He sees her as playing hard to get which is a big turn on for the drakoni, but he also misses talking to her and being near her, so....yeah. Tough situation.

Being on the road alone? A little bit tortuous, a little bit perfection. Although the circumstances that send them out of the fort aren't the greatest and Liam's worried about losing control and...you know what? I feel like I'm going on and on and on.

Let's just say there are a few exciting revelations made (lady dragons need love, too!) and I ADORE how protective these dragons are to their special someone. I liked Liam's more human side (and he's a whole lot more human than the others who've found their mates thanks to his time blending in) and watching Andrea's walls slowly crumble as she gets to know the big guy more.

These dragons are a little crazy and a lot protective and I'm INTRIGUED by what's coming up next.