Fire in Her Eyes by Ruby Dixon [Review] 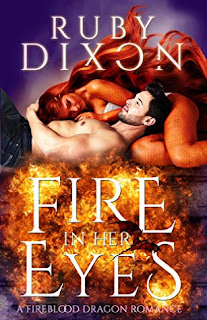 
For months, I've been chased by a red dragon. They're the females of the dragon shifter invaders, fierce and vicious and as ruthless as they are wild. She hunts me wherever I go, and I'm not safe even behind the walls of a fort. There's only one thing I can do to stop her…

…And that's to take her as my mate.

But to win the heart of a female dragon, I have to conquer her first. Not so easy for a human man...but Teva's worth the challenge.

Thoughts on Fire in Her Eyes: Yesssss...the lady dragons aren't as completely lost to the madness as their actions would indicate. Although if I backtrack a little, the golds are all bonkers before meeting their special someone, so maybe I should have figured this out before. BUT I DIDN'T and watching Gabe and Teva come together was pretty darn awesome.

So. Gabe has his lady stalker dragon following him around. He figures out that he needs to do something to keep her away from the fort before she causes irreparable damage to either his new home or the people he's grown to care about. She he heads out and Teva follows and THINGS HAPPEN.

But relationship dynamics are a little different between dragons than Gabe's used to and Gabe might have tamed the beast, but they aren't quite on the same page. Which leads to a bump or two in the road. As you might imagine.

As for Teva, I felt for her. She's lost years to the madness and Gabe anchors her to a point, but even the things she remembers are kept out of reach and it's a little heartbreaking. On the plus side of the crazy dragons, I kinda dug the multitudes gathering to catch a glimpse of Kael and Claudia's baby. Not just gathering, but BEHAVING themselves around others even when they're crazed.

A broken world, fierce dragons, madness, and sexy times. I'm still all-in with this series because I like this particular brand of crazy.