Fire in His Fury by Ruby Dixon [Review] 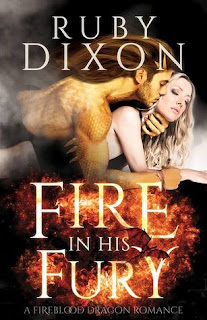 
Just like Rapunzel from the fairy tales, dreamy, romantic Amy lives a hidden life. She's kept locked away in a tower for her own safety, with her sister as protector. Amy knows it's for her own good. If a dragon catches her scent, she'll be carried away and forced to become a drakoni's mate.

But Amy has a secret - she desperately wants to be stolen. She would love to be rescued from her life of idleness and the thought of a devoted drakoni male charging in and saving her from her boredom sounds perfect to her. Of course, she wants a romantic, loving male who will adore her.

What she gets is Rast.

He's not kind. Not romantic. Definitely not gentle. But he is utterly and completely obsessed with Amy and he'll stop at nothing to make the delicate female his.

Thoughts on Fire in His Fury: Okay, these dragons are UNHINGED before they find their special someone. Just batty as heck and totally unaware of how off the rails they are. Finding their mate flips a switch in their head and all the crazy dials down to more normal levels. It doesn't go away entirely, but it definitely gets pushed back.

Unfortunately, this clarity allows them to see just how badly off their people are when they come across one who isn't mated. MAN, they're messed up. While the mated ones have a chance now, it makes me curious if they're going to find answers that will help their people as a whole. Because it's a wee bit sad that an entire species (other than the handful who have found their mates) have become mindless killing machines since they came through the rift.

Even before, I guess, but that wasn't caused by being on an alien world. Nope. That was thanks to the douchey overlords who ruled the drakoni. *rubs hands together* I'm anticipating a RECKONING to be coming to those douchecanoes.

Anyway. Let's talk about Amy and Rast since this is their story. Dreamy, romantic Amy who thinks that whatever dragon finds her is going to fall all over himself like her sister's dragon fell for Claudia. Unfortunately, Claudia left out a few things when she told her story to Amy. Like how to overcome the language barrier and how it took a while for the two to figure things out.

Frankly, while I understand where they were coming from, Claudia and Sasha didn't do Amy any favors by babying her. She's COMPLETELY unprepared for what's out in the world. Seeing as Rast is a dragon on the edge when he comes for his mate, it takes a while for them to find their rhythm. For all her physical limitations, Amy's soldiers on. She blossoms under Rast's care and they end up in a place I don't think anyone would have predicted Amy would be when we first met her.

I'm loving the world and the deepening of the drakoni's story. I have questions, though. I want to see a solution to the madness for all of them, not just the mated few, and I'm so SO curious how things are going to play out.