Fire in His Embrace by Ruby Dixon [Review] 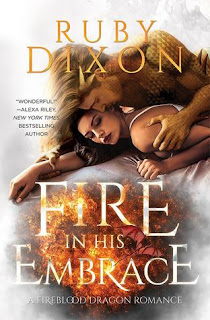 
There’s only one way to tame a dragon.

Emma Arroyo knows this. She also knows that the big golden dragon captured by her brother’s biker gang is in trouble, and it’s all her fault. He followed her scent, and now his life is in danger.

She has to fix this, somehow. If she could talk to the dragon, they could form a plan to escape, both of them. But the dragon’s mind is wild and full of uncontrollable, killing rage. There’s no reasoning with him. There’s certainly no freeing him, not when he’s like this. But Emma can’t leave without him.

There’s only one way to solve this problem - a mating. When Emma approaches Zohr to claim him as hers, she realizes just what it means to be a dragon’s mate, and how much she’s in over her head…

And she learns how fiercely possessive a drakoni male can be.

Thoughts on Fire in His Embrace: Ruby Dixon books make me happy. So happy. So ridiculously happy. It doesn't matter if the heroes are big and blue or winged and scaled, I LIKE THEM! I like their lady friends. I like the issues they have to deal with. So, I'm just going to sit here and proudly wave my RD fangirl flag high.

Anyway, while I'm quietly fangirling over here, I'm going to talk about Emma and Zohr. Emma has a few commitment issues. Let's face it, considering she was a young teen when the apocalypse went down that's understandable. She's lost pretty much everybody who meant something to her and she's learned the best way to stay alive is to stay alone.

Bonding with Zohr to save him seems like a logical choice to her. She blames herself for his capture and her moral compass won't let her walk away when he's in danger. She doesn't fully understand the complexities that go along with initiating a bond with a drakoni warrior and she kinda, sorta thinks it's temporary.

So that puts Zohr in a pickle. He's understandably taken with his new mate and he has no intention of giving her up now that he's found her. Plus, she, you know, makes him not crazy. WHICH IS A DEFINITE PLUS ON ALL COUNTS.

We get a little more insight into the drakoni past. Which, as it tends to do, poses even more questions. I'm not sure what to think of Azar and his..plans or desire to subjugate the drakoni or whatever it is he's attempting. The dude is not a nice guy and I don't like him.

Amy's book is up next and I'm already ready for it!