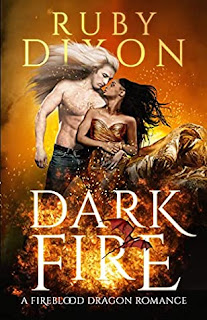 
Azar has taken over Fort Dallas. He rules with complete authority, and everyone bows down to him.

Everyone except one woman. Melina, the fort's medic. No matter what he offers, she refuses to give in. A good man would know to stop asking. Unfortunately for Melina, Azar is not a good man.

Thoughts on Dark Fire: I tend to have a VERY difficult time talking myself into reading the final book in a series because I have a hard time saying goodbye. So when I say I was extremely pleased with the ending we were given, please keep that in mind.

Just so we're clear, however, Azar isn't a good guy. He's done questionable things to secure his toehold in this world and his culture is one of subjugation and strength. Weaknesses are pounced on and used to tear others down so the dude has a VERY HARD TIME showing his softer side. Even with Melina. She has to piece together what she can of his history (because Azar is wildly tight-lipped about anything that could potentially be used against him) before she starts to understand why he does some of the things he does.

As for Melina, she's initially resentful and angry about Azar's strong-arm tactics in getting her to be his consort. She's pulled thin from her work at the clinic, she's exhausted by the day-to-day survival, and she (somewhat reluctantly) uses what little power she has to try to finagle better living conditions for the human survivors. She also starts to act as Azar's conscience. You know, eventually. Because it takes time for the guy to unbend enough to listen.

These two have a bumpy, bumpy road to get to their happily ever after. Azar has secrets, Melina has hard lines she's not going to allow Azar to waltz over. Azar is very much a product of his Salorian upbringing and it takes a lot of time and effort before he begins to understand why Melina pushes for the things she pushes for from him.

Meanwhile, the thing in the Rift is trying its hardest to crawl into Azar's head, making a difficult situation even more difficult.

Like I said, I have a hard time reading the final book in a series (because it's so bittersweet to say goodbye), but I'm very pleased with how everything was tied up. Azar learns some humanity and the humans and dragons have a chance to build better lives for themselves. *thumbs up*