Fire in His Blood by Ruby Dixon [Review] 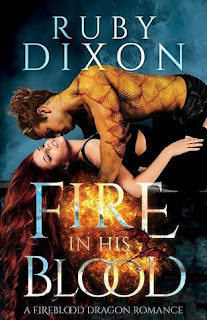 
Years ago, the skies ripped open and the world was destroyed in fire and ash. Dragons - once creatures of legend - are the enemy. Vicious and unpredictable, they rule the skies of the ruined cities, forcing humanity to huddle behind barricades for safety.

Claudia's a survivor. She scrapes by as best as she can in a hard, dangerous world. When she runs afoul of the law, she's left as bait in dragon territory. She only has one chance to survive - to somehow 'tame' a dragon and get it to obey her.

Except the dragon that finds her is as wild and brutal as any other...and he's not interested in obeying.

Thoughts on Fire in His Blood: Broken worlds do it for me, man. Broken cities. Broken societies. Broken EVERYTHINGS. All things considered, Kael fits into that category, too. He's lost to his madness until Claudia gives him a reason to claw his way out of it.

Frankly, Kael is adorable. You know, for a jet-sized monster out of humanity's worst nightmares. So he has a few flaws. Who doesn't? He works on figuring out what Claudia needs and he's not always right, but his persistence is impressive. Plus, anyone who's willing to fight to the death to make sure their special someone is safe gets a thumbs up from me.

Meanwhile, Claudia's confusion on whether she should remain loyal to the humans who left her to die or one of the dragons who devastated their world was understandable. Kael's devotion to her made her question everything she thought she knew about dragons. Yet, her sister and friend are still back with the humans and...she's torn. She wants it all.

Frankly, I liked this book. I liked broken society. I liked that the dragons have a lot of issues to overcome (OMG, A LOT!). I liked that Claudia and the others are (mostly) scrappy survivors. I'm in for the long haul!