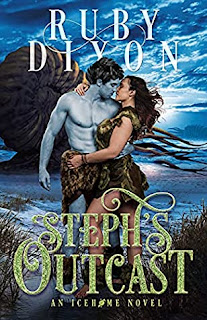 
Ever since we found the two Outcasts, it’s been my goal to get them to join our beach tribe. Handsome, impossible Juth has resisted all my efforts to recruit him and his small son. He’s made it very clear that he doesn’t belong with us.

But when I’m trapped at Juth’s side as the beach is invaded by monsters, everything changes. He talks to me instead of pointedly ignoring me. We become friends. Heck, we even share a few stolen kisses. And when the rescue party arrives, he announces to everyone that I’m his mate and he’s joining the tribe.

Which is great except…I never agreed to anything? If I point out I’m not Juth’s mate, he’ll pack up and leave with his son. He sure won’t give me more of those toe-curling kisses or touch me like it’s the greatest thing that’s ever happened to him.

Thoughts on Steph's Outcast: Oh, MAN. I adore spending time on Not-Hoth/Icehome. This place is a vaguely dangerous, icy place and it's SO DARN FUN THERE. And the aliens who populate this planet? They're pretty awesome in their own blue, hunky way.
This time around we have Steph and Juth. An unexpected migration puts the beach camp in a little bit of a pickle and Steph and Juth have to spend time to together. Quality time. With Juth's son, sure, but they get to know one another (at least as much as two people can get to know one another when only one can understand the other). Then Juth gets bopped by the translator fairy and suddenly Steph is mated to the big guy and she's...kind of okay with that.
That sounds kind of complicated, but it's not. Steph starts out trying to draw Juth and Pak into the tribe and along the way she really starts to like the way he looks out for her. More than that, she likes him. Just because. She also likes his son and how good a father he is. Basically she likes the entire package. The ENTIRE package. (What? These guys like to be naked and Steph found it hard not to notice that even when she was trying not to.)
Anywho. A little danger, a lot of steamy kisses, a wee bit of a misunderstanding, and a kind of big upheaval for the residents of the beach tribe. They're hardy folk, though, and they got through it. Things might have been tough for a while, but they made it work. *thumbs up*